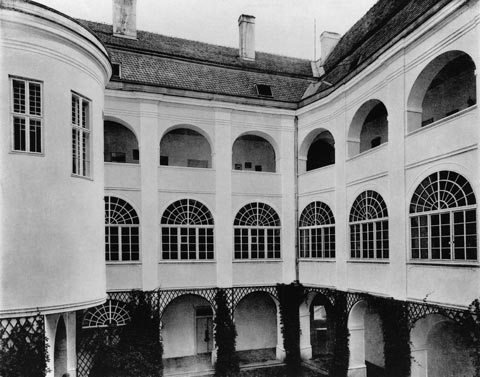 Since autumn 2013, Radim Vrla, a preservationist from the National Heritage Institute in Kroměříž, worked on construction and historical research of the castle. During his work, he found traces going back to late Gothic times!

External specials were invited to participate on the processing of certain areas of the research (history, dendrochronology, plaster stratigraphy). The results of his work represent an important basis for further use of this listed building.

For example, the survey confirmed that the inconspicuous and at first sight quite modern-looking building of the castle conceals a substantial part of a late-Gothic fortress, built by the Tetour of Tetov family in late 15th century. Surprising was also is the discovery of preserved fragments of Renaissance exterior plasters of the former tower, which is hidden in the east wing of today’s castle.

Read from a MF Dnes interview:

Preservationists: Some changes did a lot of harm to the castle
For modernist Zlín, which rose to fame thanks to the activities of the Baťa family, the castle is an all-important link to distant past. The historic building of the Zlín castle is proof that the town has a much longer tradition, which should be carefully preserved. These general statements were confirmed by the construction and historical survey, performed by Radim Vrla of the National Heritage Institute in Kroměříž, which is to be completed in January. "The castle is an extremely interesting object," says Vrla.

What exactly makes the building a castle valuable for conservationists?
It is a conglomerate of many styles - from late Gothic through Renaissance, to Baroque and modern adaptations. Some of the castle’s structures date back to the 15th century, to a fortress, which replaced the old Zlín castle that used to stand above Kudlov. And so today's building contains some original parts. In spite of the fact that the castle was rebuilt many times in the 20th century, which decreased the number of historical details, it is still very important for the town. It is a cultural monument, which is to be treated with care and respect. We should stop piling up negative actions, which would devalue the building.

Did the explorations reveal something that clearly surprised you?
We discovered exterior plaster from the Renaissance period in the east wing of the castle. In this wing, which has a very complicated history, is a built-in tower, which probably dates back to the 16th century. It is not visible from the outside today, and so its outside plaster is now internal, and it is covered with other layers. However, we have discovered it in some of the halls after removing old plasters – and that is the new discovery. You do not meet with such things with much more important monuments.

Will you insist on preserving it?
Yes, but we do not care if it remains hidden beneath other layers. We would like to prevent the plaster from being chopped off completely or prevent other construction changes that would destroy it. In order for the plaster to be visible again, we would have to perform some in-depth probes and only then it would be possible to start thinking about to what extent it would be possible to show the original plaster.

The castle has undergone many changes, has the building suffered a lot from them?
Some of them were very insensitive. The worst thing was the excavating of part of the courtyard in the 1990 during the construction of the kitchen. The historical layers below the courtyard were destroyed, a thing that should never happen in such buildings. These layers preserved valuable information that could have been examined by archaeologists in the future. There were some archaeological research going on at that time, but it was much pushed by the planned construction.

The adjustments that followed were not so drastic?
The original roof, for instance, had a completely different shape. There were three massive Baroque towers in three corners, which gave the castle a very romantic look. Today’s austere-looking roof comes from early 20th century, when it was renewed. There were other repairs during the 20th century, but they were more of a technical nature and fortunately did not fundamentally change the castle. Windows and floors were exchanged, but that happens in all buildings.